Categories of Nets accepted at LICS 2021 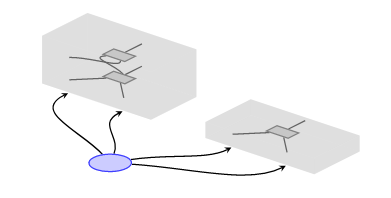 We are excited to announce that the paper Categories of Nets, authored by our very own Fabrizio in collaboration with John Baez, Jade Master and Michael Shulman has been accepted to LICS 2021. This paper systematizes the complex relations between different flavors of Petri nets and monoidal categories. This relationship is also the core idea upon which Statebox relies.
🎉✨

Albeit relationships between nets and categories have been known for roughly 30 years, things were still a bit rough around the edges, and a full systematization of how they worked out was lacking. John, Fabrizio, Jade and Mike came up with a new definition of Petri net, called Sigma-net, that bridges the definition of Petri net and the one of pre-net, which were already central in current research. In practice, a Sigma-net is a Petri net where one can decide which inputs and which outputs are order-insensitive, and which one are not. This new definition allowed to draw a clearer correspondence with monoidal categories, to the point that much of the already existing correspondences in the literature can be obtained by composing arrows in this diagram: